Getting Swift to run on NVIDIA Jetson TX2

One of the core challenges when developing AI/ML embedded processing systems is the ability to balance processing power, portability and development speed. While traditionally AI/ML problems are being solved in the Cloud, some of our special projects involving live video processing and computer vision call for an on-site, low-latent & power-efficient solution.

The recently released NVIDIA Jetson TX2 supercomputer board has been a game-changer in the selection of platforms available for our choice when dealing with this topic. The TX2 remains the fastest, most power-efficient embedded AI computing device at the moment.

With the TX2, NVIDIA managed to create a very powerful package which is ideal for our requirements in live video processing, object/face detection and Deep Neural Network analysis. With 4 standard CPU cores (+2 auxiliary Denver cores), it delivers enough power for running data-intensive processing + the additional 256 CUDA cores on the GPU give our data scientists something to run their complex deep learning neural networks. 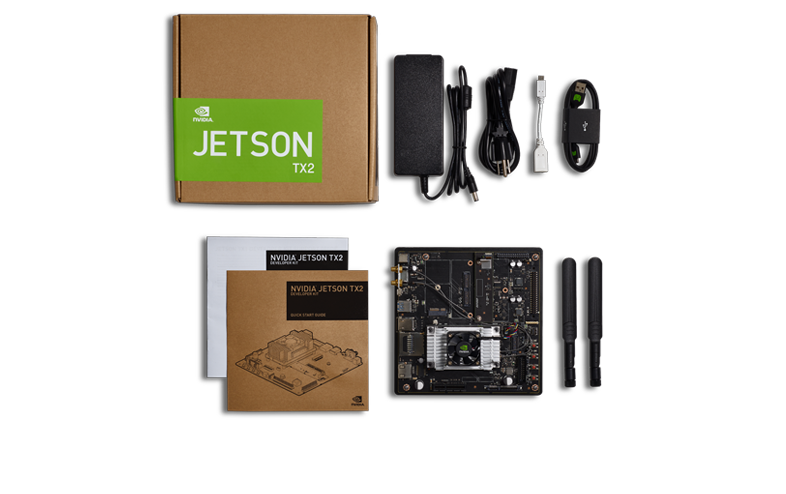 One practical challenge we encountered when working with NVIDIA hardware (and embedded systems in general), is choosing a programming language/platform to build our end-user solutions. Different dev teams have experience with different technology stacks. Programming languages commonly used by data scientists differ greatly from ones used by application programmers to implement business logic or hardware integrations. The problems we’re trying to solve however, require a close cooperation between the two departments.

That’s why we decided to integrate Swift, the latest programming language from Apple, which took the iPhone/iOS development world by storm since its introduction in 2014. From our perspective, Swift has multiple advantages:

Getting Swift to run on TX2 wasn’t obvious and we were clearly pioneers in this area. Below, we’d like to share specific steps & fixes we had to apply to get our full stack (including Swift Package Manager) running on NVIDIA Jetson system-on-chip.

“Nor” memory constraint issue in LLVM

The Swift version open-sourced by Apple and openly-developed on Github is mostly tweaked to run on x64_64 platform (Intel 64bit). TX2 is based on aarch64 architecture (ARM 64bit, the less popular variant). The LLVM compiler infrastructure has a rare issue generating aarch64 code in which nor memory constraint cannot be resolved properly (during libdispatch compilation). This is mostly documented in the LLVM Bugzilla but unresolved at the moment of publishing this post.

With a little help from Saleem at Facebook/LLVM.org we were able to replace nor with a more generic m constraint and get working properly. With the patch applied, LLVM is able to build libdispatch required for Core Foundation library to work properly.

NVIDIA ships a slightly older version of binutils which has relocation issues when applying TLSDESC relocations with no TLS segment. Fortunately the issue has been fixed in newer versions and a patch is available. We repacked binutils with the patch applied for Jetpack:

Even though Swift compiler by itself is fully cross-platform ready (after all it’s used to compile all the ARM-based iPhone apps!) the Swift Package Manager is not fully there yet, a lot of things are hard coded. Even though the Package Manager has basic notion of 3 platforms (Darwin, Linux, Android), it makes a hard-assumption that the Linux runs in favor of x86_64-unknown-linux. This can be observed in i.e. Triple.swift source:

We worked around it by adding proper aarch64 enums to the class and replacing x86_64 with aarch64 where necessary. This is a somewhat temporary solution and a proper fix would be to add true cross-platform support to Swift Package Manager (work in progress, as we were able to learn).

Finally, the last problem came out during CoreFoundation compilation. Variadic args support on aarch64 seems to be “almost finished” in LLVM/Swift yet lacking the last VaListBuilder bit required for proper conversion when calling to C. This results in build errors in style of:

in Swift itself, when working with native C/Swift vaargs conversion. We weren’t able to find a fully reliable solution to this problem yet and we simply asserted all the vaargs-based initialisers for NSString. It seems those constructors are very rarely used and we weren’t able to hit a code path with our usage where the assert would be triggered. But this issue definitely requires fixing. Hopefully this will be provided soon, as there seems to be a lot of active development in this area.

After resolving all the issues, we were able to get a fully working Swift compiler + Foundation library and a Swift Package Manager being able to build integrated Swift/C code in one go.

This setup allows us to use Swift, a modern, high-level system programming language to quickly develop and iterate forward business/app/model layers of our projects. We also benefit from a wide talent of senior Swift/iOS developers on board to review & improve our code. Plus, we don’t lose the ability to integrate C/C++ industry-standard ML/AI/Data-science tools & libraries that make full use of NVIDIA GPU superpowers.

Hopefully, bootstrapping the existing hurdles of aarch64 can be resolved in the LLVM/Swift repositories soon. In the next weeks/months, we will be working with the upstream developers to make sure this works out of the box without any compromises on all arm64 boards.

We think this represents a top of the line dev ecosystem for development of modern, reliable software embedded AI/ML Vision Processing applications.

This post was written by Michał Dominik Kostrzewa, Head Of Special Projects. In need of some brain power? Reach out to us via hello@ynd.co with your questions about ML/AI projects.